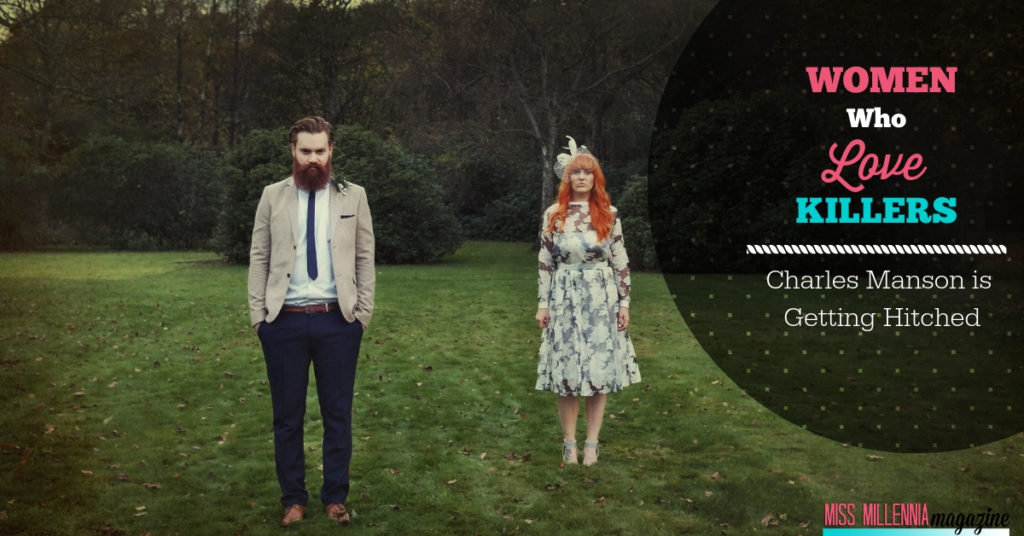 Over 40 years ago, Charles Manson was sentenced to the death penalty (which has now been reduced to life in prison). He was involved in a conspiracy to commit several murders, including the murder of famous, pregnant actress Sharon Tate. Although Manson did not directly participate in these events, he exerted his influence and directed his followers to commit the atrocious crimes they carried out in the summer of ’69.

Just last week Manson filed paperwork at the Corcoran State Prison to marry 25-year-old Afton Burton. Why would this young, attractive, seemingly normal(ish) young woman throw her life away to marry an 80-year-old convicted murderer? One with whom she can never have conjugal visits or ever hope to lead a normal, happy life? Many are fascinated by this decision, but it might shock you to learn that many murderers and serial killers find love behind bars. Women would flock to their court hearings to catch a glimpse of the man they’ve penned hundreds of love letters to during their incarceration. In addition to Charles Manson, serial killers like Ted Bundy, Richard Ramirez, Jeffrey Dahme, and terrorist, Dzhokhar Tsarnaev (responsible for the Boston marathon bombing)  have all received support, love letters, and even marriage proposals from women. This strange lust or love fascination is called Hybristophilia, which Wikipedia describes as:

When one can only become sexually aroused when with a partner they know has committed a crime (whether it be as simply as lying or cheating or as shocking as rape or murder).

Katherine Ramsland, a professor of forensic psychology, has found in her research that women exhibiting Hybristophilia have given a variety of answers when asked why they chose this strange and obsessive lifestyle. They express a desire to change a man as powerful and twisted as a serial killer, claim to see a glimpse of the innocence he once had as a child, or simply want that five minutes of fame. Ramsland also cites the idea of the “perfect boyfriend.” It’s extremely easy for women to keep up this fantasy, because there is little required of this relationship when your life is lived through phone calls and weekend visitations. You do not share a home or meals, and often you do not have children together.

Although these women may be speaking earnestly, Ramsland notes: “some mental health experts have compared infatuation with killers to extreme forms of fanaticism. They view such women as insecure females who cannot find love in normal ways or as ‘love-avoidant’ females who seek romantic relationships that cannot be consummated.”

In Afton Burton’s case (who has now renamed herself Star), she fiercely believes that Charles Manson is innocent of all charges against him. She insists that Manson is not capable of that type of manipulation he is accused of possessing over his followers. This assertion may be hard to believe, considering just two years ago Star shaved her head and carved an X into her forehead upon Charles’s request after he was placed in solitary confinement. The image of Star is eeriely similar to the Manson girls pictured below, who shaved their heads and carved X’s into their foreheads in protest outside the courtroom where Manson’s trial was being held.

Others have proposed a theory that hinges upon evolutionary psychology and the idea of the alpha male. Psychologist Leon Seltzer argues that women’s subconscious desire for a dominant male personality is something that is hardwired into our genetics from thousands of years ago. He argues that this would explain women’s attraction to “bad boys.” And, honestly, what could be more dangerous than a serial killer? Although Seltzer hypothesizes about these connections, he notes that the majority of women only entertain this attraction to dominance and danger in their fantasies. Those who actually become romantically involved with serial killers are few and far between.

Click here to find out more about serial killers and their groupies.

Why Do Women Fall for Serial Killers?

‘I am Charles Manson’s Wife’

Previous Post: « 7 Killer Signs That Your Boyfriend Is Cheating On You
Next Post: Should You Take a Holiday Vacation This Year? »