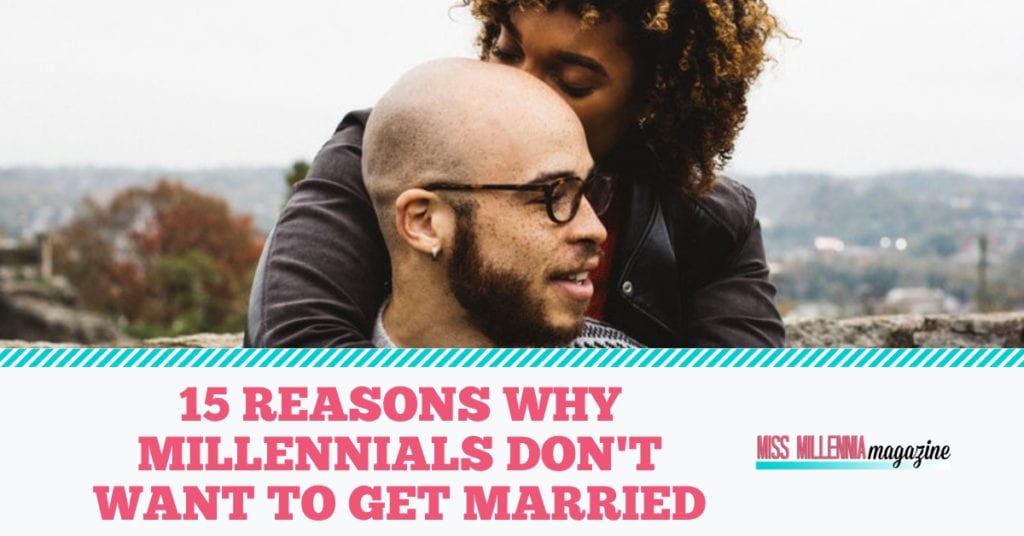 As I finish up the details of my oldest sister’s bridal shower I think about my own ideas of marriage. Although the idea has been integrated into about every childhood story I have heard, as I have become older, getting married isn’t necessary on top of my list. I’m not alone. A recent study has shown that about a quarter of millennials do not want to get married, ever. There are so many factors that could be why, but personally I think this is why millennials have swayed from traditional relationships.

1. The Shift of Culture

In many cultures, marriage is more of an agreement between two families compared to what it is considered in the United States. The concept of love marriages was not prevalent in western culture until during the Victorian age, and even then women’s rights were limited if they stayed unmarried. Today, marriage is not a necessary in a woman’s life to be successful. In fact, women who are divorced and single moms are positively portrayed in the media more often than in the seventies and eighties. Beloved female icons like Carrie Bradshaw from Sex and the City and TV shows like Mom have highlighted this shift in culture.

2. Being a Child of Divorce

Divorce with children is never pretty. There are a lot of words that can’t be unspoken and feeling that can’t be unhurt. Children are especially susceptible to these things, especially because they do not understand the complications of an adult relationship. My parents divorced when I was eight, and it was ugly. It took me a very long time to even understand what a healthy romantic relationship was. Divorce rates have been balancing the 50% line since the late seventies. Children who witness divorce tend to have more relationship issues with significant others in their adult life, causing the influx of millennials wanting to avoid marriage altogether.

Those who have been in a relationship for quite some time might often hear “When will you guys get married?” However, money is the true reason for holding off tying the knot. The average age to be married in America is currently 27 for women and 29 for men. Your mid-to-late twenties is also when people find themselves most in debt, especially with the highest tuition costs in American history. Since the average cost of a wedding is $26,000, it may be better to not get hitched at all.

Prior to Roe v. Wade, abortion was illegal in most states. Contraception like the pill was just being developed and had major side effects. Sex education was limited and abstinence was still widely taught as how to prevent pregnancy and STDS. However, humans are humans and have sex, which leads to lots of unwanted pregnancies, which leads to a lot of quick marriages. The age old, “Do the respectful thing,” suggests that a man who gets a woman pregnant should marry her. With improved effectiveness and availablity of contraception and abortion, marriage isn’t necessary with an unwanted baby.

More than 75% of high school students going on to higher education, so marriage isn’t the first step of adulthood, a degree is. With parents that didn’t go to college, many millennials have put education as their priority, leaving romantic relationships for later. The average age of a graduate student is 33, and between crippling student loans and time spent on their education marriage seems like an unnecessary, daunting conquest.

Until recently, gay marriage has been illegal in most states in the U.S. removing a whole class of people from being able to get married. With more than 7% of millennials identifying as LGBTQIA+, this created a big hole of millennials who couldn’t get married if they wanted to. Many supporters of gay marriage also refused to get married until their LGBTQIA+ peers could. Even though gay marriage is legal in the United States now, many states are making it extremely hard to obtain a marriage license. Those who do choose to get married often see a lot of push back when living in conservative states.

7. The Hook Up Culture

Unlike generations past, millennials have a complicated dating scene thriving in the new age. Apps like Tinder create an easier outlet for quick hookups compared to the standard meeting someone at a bar. It isn’t like one night stands are new, however, casual sex is much more common than it has been in the past. Many cling to the singlehood because they are satisfied sexually through the technology available.

With underemployment rates higher than any other generation, once millennials grab a career it’s hard to let go. Planning a wedding causes a decent amount of stress which can leak into your work life, especially if you have to take days off. Millennials desperate for careers, especially in their field, are less likely to disrupt that for marriage.

It’s funny to say, but marriage hasn’t had the best reputation in the past decade. A 2010 Pew survey conducted that single people do not see marriage have many advantages. That age old, “Marriage creates social and economic status within the community, happiness, and sex” isn’t true.  More people see marriage as being tied down than having security.

Marriage isn’t the greatest part of history for women. Forced marriages, being used as basically property of your family, or becoming a servant for your in-laws aren’t really what we see as happily ever after. Many women who identify as feminists do not believe in traditional marriage, the taking of the man’s name, and so on. Marriage represents a patriarchal idea of a woman belonging to a man in some minds, making it quite undesirable.

If a marriage ends, things such as alimony, custody, child support quickly become part of your vocabulary. While originally these laws were created to protect women and children who have been abandoned by men, they are largely outdated and abused. After a divorce, assets are divided, even if they were acquired before marriage or were solely from one person in the relationship. Those who work hard for what they have do not want to be burned or possibly be cheated on by former lovers. While legal documents like prenups are available, it is usually a hard to get both to agree without someone getting offended. If you’re not married, your assets are your own.

When you get married, if your spouse has bad credit and certain types of debt, it is your burden even if you are financially responsible. Things like medical bills become your responsibility as well. Creditors are allowed to dip into joint accounts even if one of the spouses has nothing to do with the debt.

13. The Option to Walk Away

If you’re married, complications of breaking off your relationship are much harder than when just dating. In turn, this makes those who are not married, but in a committed relationship much stronger when they hit rough patches. Women who are married are less likely to leave abusive partners compared to women who are dating. Marriage often creates a dependence on your partner, making is harder to leave if things become too much or even dangerous.

14. Sharing your life with someone isn’t necessary

Some people honestly don’t like living with other people, they like being alone. And that’s okay. While in history unmarried women were called spinsters and old maids, even unmarried men who didn’t dwell with women often were questioned on their sexuality and saneness. However, today it’s completely okay not to get married and live an independent life.

15. You can always get married later

Even if marriage is not what you want it still is always an option no matter how old you get. There isn’t an expiration date on when you have to get married. While millennials now might swear on never getting married, we do change as we grow and our thoughts of marriage may change as well. All in all, marriage is an option always for most people.

Are you one of the many millennials who don’t believe in getting married or do you think that’s crazy and can’t wait to be tied down? Comment below and check out other articles on Miss Millennia all about millennial relationships. 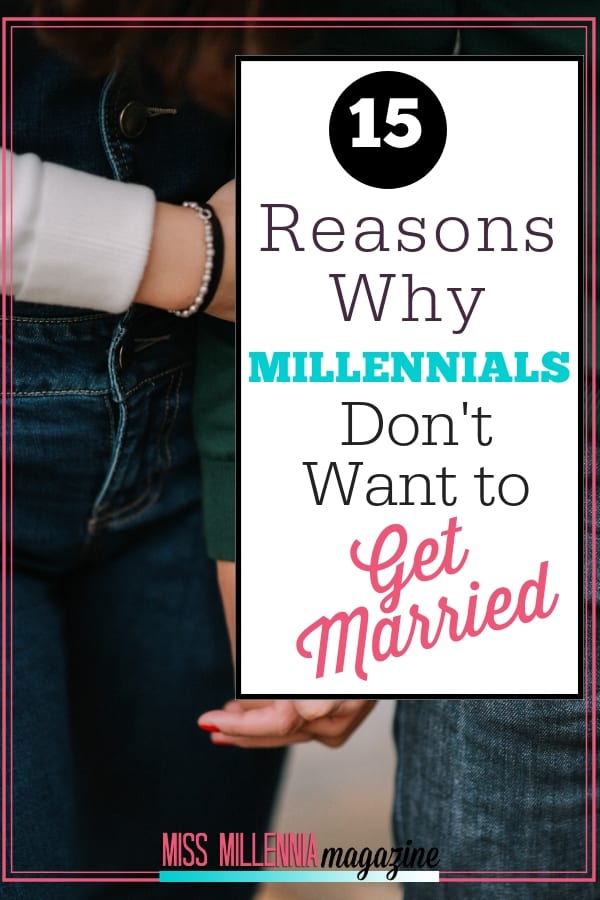