Feminism has become more and more popular today, and for good reason. Women are breaking barriers, but there’s still so much more work to be done. Looking for a soundtrack to go with your fight against the patriarchy? We’ve got 10 feminist artists you need to hear.

In Maggie Lindemann’s song “Pretty Girl,” she addresses the patriarchal expectation that women are simply around to be looked at and appear pretty.  “I’m more than just a picture,” she sings, and later: “I’m not just a pretty girl.” Her video gets even more feminist when it depicts two men catcalling Lindemann and her friends. She flips them off and proceeds to pour her drink on their car. Lindemann’s song and video definitely show that she’s one of the feminist artists you need to keep an eye out for in the future.

Hailee Steinfeld’s hit song “Love Myself” certainly captures the feminist belief that women don’t need a man’s approval in life. You can’t go through life constantly looking for someone else’s affection. First, you need to love yourself. It also addresses another feminist concern about owning your sexuality. As Wonder Woman put it, “men are essential for procreation, but when it comes to pleasure…unnecessary.” You don’t need to depend on a man for affection or for sexual satisfaction. As Hailee Steinfeld sings, “I know how to scream my own name.” She is also one of the feminist artists you need to keep on your radar.

Rachel Platten’s “Fight Song” is another great feminist song to pump you up. She sings “I don’t really care if nobody else believes, cause I’ve still got a lot of fight left in me.” Even if you feel that the world has got you down, there can still be some fight left in you. Whether you’re trying to stand up to gender discrimination in the office or just trying to get by on your own for the first time, Platten’s song is a great pick me up.

Colbie Caillat’s “Try,” like Lindemann’s “Pretty Girl,” addresses the huge societal expectations put on women’s appearances. She sings, “…keep it slim so they like you, do they like you?” Women are constantly told that we must maintain our appearances perfectly. We must look put together, but not like we try too hard. No makeup shows you don’t care, too much makeup makes you a slut. Too slim and we look unhealthy, not slim enough and we look undesirable. As a woman, you just can’t win when it comes to expectations. And that’s exactly what Caillat’s message is. She sings, “You don’t have to try so hard…you don’t have to change a single thing…when you’re all alone by yourself, do you like you?” That’s the only important thing. As a feminist, and as a woman, what matters is that you are doing what makes you happy, not just what society expects.

When it comes to feminist anthems, look no further than Daya’s “Sit Still Look Pretty.” With lyrics like “this gal right here’s gonna rule the world” and “this queen don’t need a king,” Daya’s song absolutely encapsulates feminist beliefs. It addresses the societal expectations of women to “sit still and look pretty” and preaches ignoring them. Women can do so much more than “look pretty.” We can do anything, even “rule the world.” We also don’t need to depend on men, we women are queens who don’t need a king. After such an anthem, Daya is one of the feminist artists we’ll definitely want to hear more from.

Fifth Harmony’s “That’s My Girl” is a fantastic girl power anthem. A huge part of feminism is cheering on your fellow women and this song encapsulates that. “Get mad independent and don’t you ever forget it,” the ladies sing, emphasizing the importance of girl power. Once again, women don’t need to depend on any man. And with a sisterhood like Fifth Harmony’s cheering us on, we can do anything. With their girl power sisterhood, Fifth Harmony is certainly a group of feminist artists you’ll want to hear more of.

Going back to the roots of feminism, this list wouldn’t be complete without Lesley Gore’s “You Don’t Own Me.” When it came out in 1963, this song was one of the works that helped inspire the Women’s Liberation Movement. It was one of the first songs that mentioned a woman wanting independence from a man. With lyrics like, “you don’t own me, don’t tie me down cause I’d never stay,” it’s easy to see how this became one of the earliest feminist anthems.

This list likewise wouldn’t be complete without the other classic feminist hit, “I am Woman.” When you hear lyrics like, “I am strong, I am invincible, I am woman,” how can you not sing along? Reddy’s song absolutely encapsulates feminist beliefs. It describes the struggle of women, and how we are strong enough to overcome anything. Helen Reddy is certainly one of the greatest feminist artists of our time. If you haven’t heard her song yet, go give it a listen immediately. I promise it’ll pump you up.

In a world where women are constantly told to not appear too bossy, Demi Lovato’s song strikes a chord. While men are called strong leaders when they’re in charge, women are overwhelmingly told they’re a bitch if they act the same. But as Demi says, “what’s wrong with being confident?” We as women need to own our power. We don’t need to fear being confident. It’s the rest of the world that needs to catch up. And with that kind of message, Demi’s definitely one of the feminist artists you should listen to.

10. Beyoncé—Too Many Songs to Name

You didn’t really think I was going to write a list of feminist artists without including Beyoncé, did you? Queen Bey is arguably one of the greatest feminist artists there is, and she has too many fantastic and empowering feminist anthems to pick just one. So, I’ll name several. There’s “(Girls) Run the World,” for when you need a totally empowering anthem to remind you that you can fight anything that comes your way. There’s “Single Ladies (Put a Ring On It)” to remind you that you don’t need a man in your life to have a great time. And there’s “Formation,” to remind you to support your fellow ladies, especially women of color. Feminism must be intersectional. In short, when in doubt, check out a Beyoncé song for a feminist pick up.

There you have it, 10 feminist artists you should go check out. Just think of it as your new soundtrack for smashing the patriarchy. 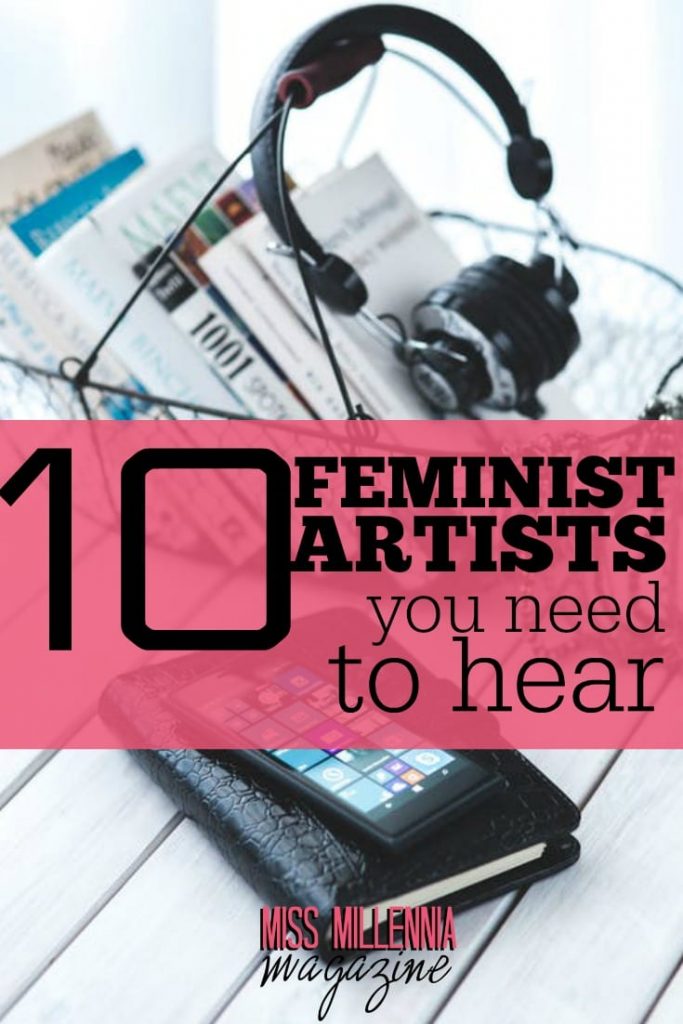 Previous Post: « 8 Ways to Burn Calories When You Have No Time to Exercise
Next Post: 6 Problems Millennials Have With Managing Their Money »