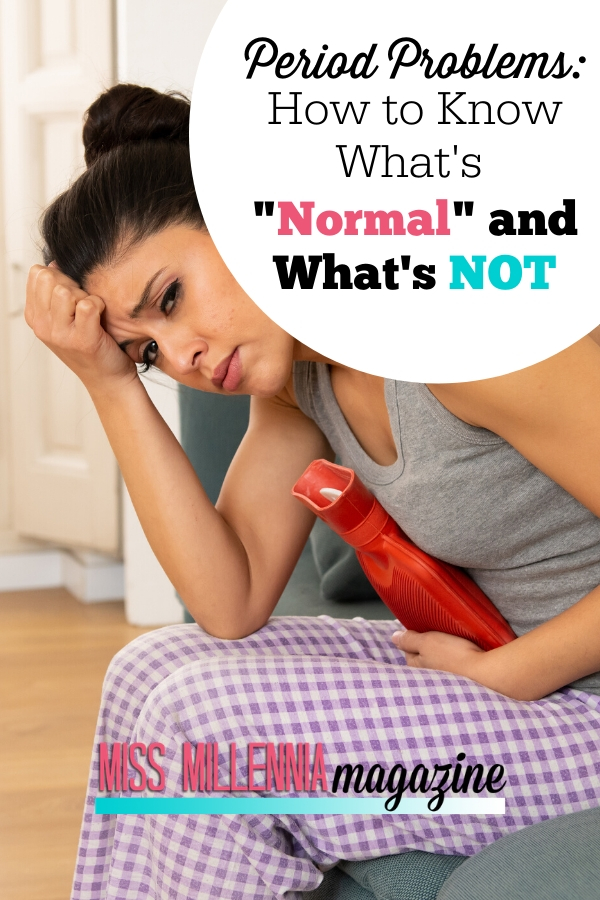 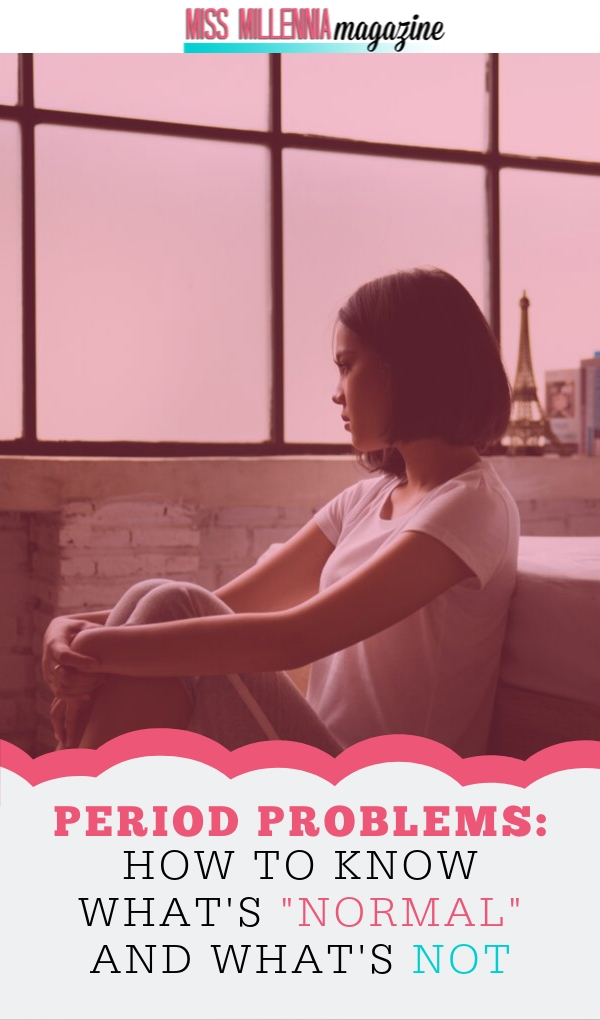 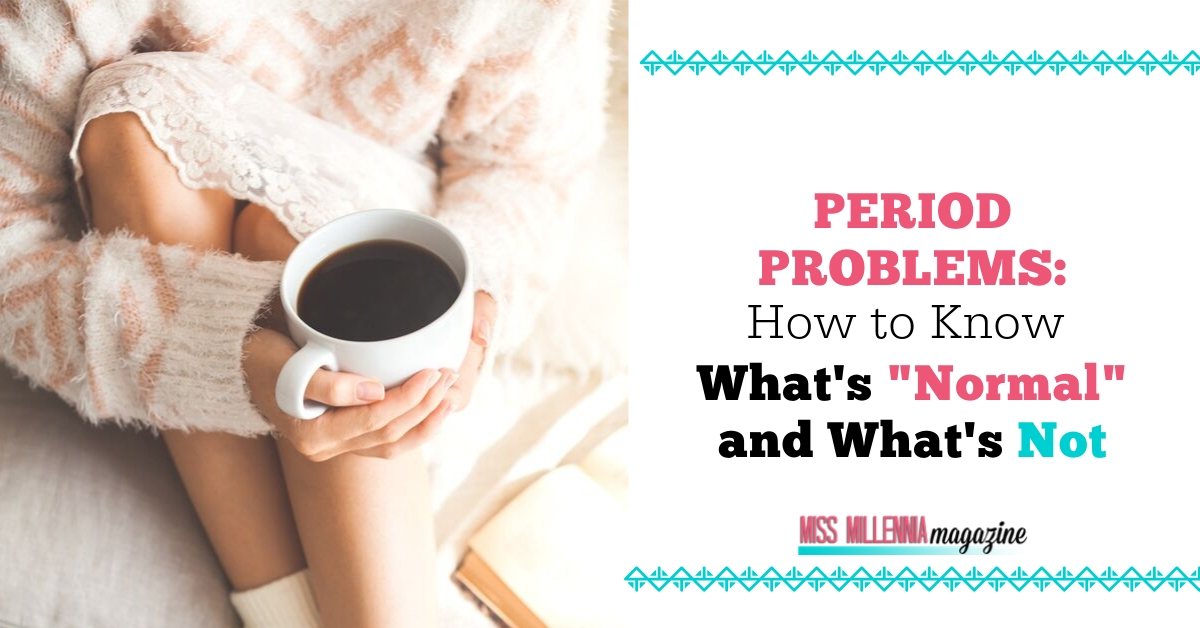 If you have ovaries, then you probably understand the frustrations of getting your period. It’s not fun. In fact, it’s so not-fun that the phrase “period problems” is used in everyday conversation, and is even a popular hashtag on Twitter.

Despite the collective groan from period-havers across the globe when they know their time of the month is coming, everyone’s experience with their period is different. For some, their periods cause no pain, while others are bedridden due to cramps

. Sometimes period side effects only last a couple of days, but sometimes people have to endure them for over a week. Just like everyone’s body is unique, so too are their periods.

That being said, people with periods maintain certain expectations for what our experiences should be like. If we bleed heavily for two weeks, for example, that might cause alarm. Likewise, if we don’t have our period for three months in a row (and we don’t take a form of birth control that would cause this), we might be worried.

But how do we really know what’s considered “normal” and what should raise concerns?  Here are the facts.

First: Why Does This Matter?

. Even if you don’t go through it yourself, odds are you know someone who does. Especially if you are in a romantic and/or sexual relationship with someone who has periods, you need to understand the way their body works so you can be a responsible, responsive, and respectful partner.

If you have periods and think maybe something is not quite right with yours, it’s crucial that you talk to your doctor. Either your general physician or your gynecologist is a good person to talk to. They are the experts! At the same time, doing some research on your own so you can be informed when you do speak to a doctor is also important.

Want to get in the know? Read on!

Keep reading to start learning all about what’s considered “normal” and what’s not for periods.

The Basics of a Period

A person’s period is part of a larger body cycle called menstruation. Menstruation typically operates on a 25-30 day cycle, though it can be as short as 21 days or longer than 35. For most people, a period lasts for three to seven of those days. The color of the blood that comes out will vary from red to brown, depending on the day. The consistency will also change over time.

Even if your period isn’t necessarily regular, there are often signs that it is coming. These signs include cramping, bloating, tender breasts, and breakouts—these symptoms are commonly referred to as PMS. (And no, going through PMS does not necessarily make you crabby or weepy or overly emotional in any way, though it definitely can and that’s ok!)

Many people’s bodies don’t have a menstrual cycle that is completely regular. Sometimes, your period will come in exactly 28 days, then the next time is 23 days later, and then it takes 30 days. Occasionally, you might even skip a month. If this is characteristic of your body’s schedule, you are definitely not alone. And the timing isn’t the only thing that can fluctuate over time. The amount and texture of the blood that is discharged can also change.

Skipping a month here or there, having a heavier or lighter flow, or being early or late by up to a week is not necessarily cause for alarm. If you don’t have your period for several months in a row or you’ve noticed any other significant changes, there are many possible causes, not all of which automatically mean trouble. You might be under a lot of stress, have significantly lost or gained weight, changed your diet, or have started exercising more. If any of these have happened to you, then it’s common for you to skip a period or two.

However, if you’ve gone several months without having a period, that might be cause for concern. To make sure the irregularity is not a symptom of a larger issue, definitely consult with your doctor. To learn more about this, we have a whole section on it later in the article!

How to Track Your Cycle

If you want to be more attentive to your cycle, I highly recommend getting the Period Tracker: Menstruation Journal. Even if you don’t have an irregular period, it will help you get more in tune with your body! You can use this same journal for four years and it’s only $7. If you’re not a paper and pencil kind of person, you should buy the Period Tracker App instead!

Warning: This Next Part is All About Period Blood

Did you know that people only lose about one cup of blood during their period? It’s true! We’re going to discuss even more about what you need to know about period blood.

Ok, so it’s Day Six and you’re still really bleeding heavily. When is this torture going to end?

Also called menorrhagia, a heavy flow can manifest in two different ways. One way is when you bleed excessively for the length of a usual period. Another way could be an extra-long period. Neither is fun.

Some people bleed more during their period than others, and that’s completely normal. Also, the amount you will bleed from day to day fluctuates naturally. Just because you have a heavier flow than someone else doesn’t necessarily mean you have menorrhagia.

However, if you’re bleeding much more than you usually do for a long period of time, you might be bleeding too much. Another sign is if you’re changing your period products much more frequently than you should. If you think either of these apply to you, it’s worth checking with your doctor to make sure everything is ok.

While some blood clots are not cause for alarm, if yours are the size of a quarter or larger, or you’re passing clots really frequently, you want to get things checked out.

What causes blood clots? Blood clots are actually formed by little contractions! Those period cramps you experience are from your uterus contracting. If that happens enough, the blood isn’t able to thin out before being discharged, and you end up with clots.

Blood clots can be symptoms for a few different period-related issues, so it’s important to monitor your bleeding and check for those. Again, if you have a few small blood clots, that’s nothing to worry about. It’s those big ones that you want to be on alert for.

There are several things that can cause breakthrough bleeding. If you are on the pill and do not take it regularly, this is likely the cause of the irregularity. Another reason could be that the specific type of birth control you’re on doesn’t work well with your body. If this is the case, switching to another one will likely solve the problem, though you might have to try a few until you find one that works.

You should never change your birth control without consulting a doctor first. A quick visit to the gynecologist will solve this problem for you. They will be able to help you figure out what method will be a perfect fit for you.

Breakthrough bleeding may also be a symptom of pregnancy or an infection. Obviously, you definitely want to see your doctor if this might be the case.

But That’s Not All

If worrying about the blood coming out of our vaginas was all we had to do during our periods, they wouldn’t be quite as bad. But, alas, there are all these other things we have to go through that make periods so so much worse.

Don’t forget that even if you personally don’t get periods, that it’s still important to know about them and their side effects because it affects many people in your life.

If it seems like you get the stomach flu every time your period comes—don’t worry, you’re not alone. It sucks for sure, but some people’s bodies deal with their period differently than others. Feeling ill doesn’t necessarily mean something is wrong. If your PMS symptoms

are interfering with your life, though, your doctor can help you find ways to lessen the pain. In the meantime, grab a heating pad to use on your stomach, back, and anywhere else you’re experiencing pain.

Studies have shown that people who experience significant period pain have reduced cognitive ability—including lower attention spans and less of an ability to multitask—during their time of the month. If you become frequently forgetful, unable to concentrate, or all-around spacey when you’re on your period, it’s not your fault!

Just like during pregnancy, some people experience cravings when on their period. It’s because your hormone levels are rapidly changing and your body has different needs! You might be hungry all the time, and you could not be hungry at all. Don’t feel bad if you feel like you want to eat the entire Willy Wonka Chocolate

Factory during your period. Treat yourself…you’re going through a lot right now.

To Sum It All Up

As I discussed earlier, what is “normal” for a period will vary from person to person. However, these are general things to look out for that might help you determine if you need to consult with a medical professional about your period. In some cases, irregularities may be symptoms of a health problem with which you will want to deal. Often, though, it’s just a result of the uniqueness of your own body! 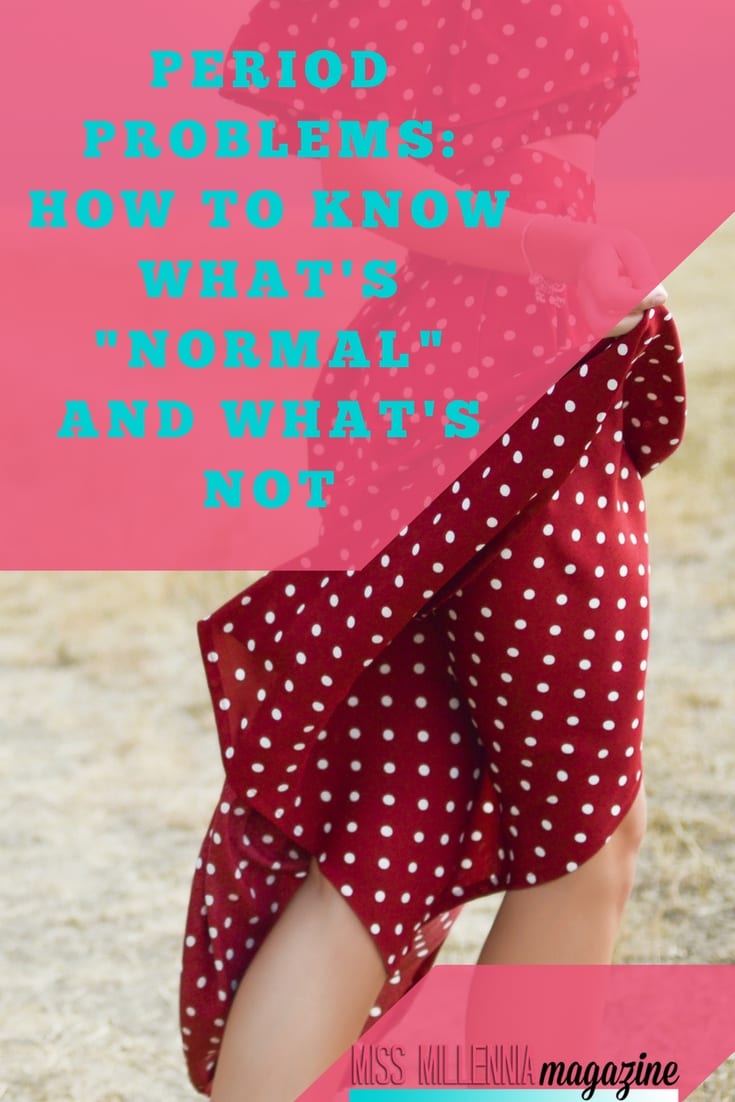 Interested in learning more about your period problems? Be sure to read Period Problems & Solutions: How to Get Out of Hormone Hell. 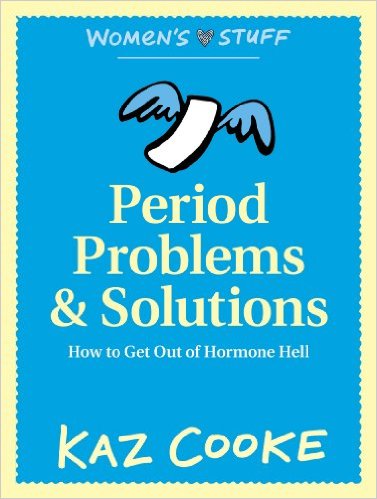 Previous Post: « 5 Easy Dental Procedures That Will Boost Your Confidence
Next Post: How To Get Started with Real Estate Investing »