FOMO (Fear of missing out) is a disturbingly common issue among Millennials. Usually, we blame this cultural phenomenon on mass media, identifying exactly where and when “the youths” are influenced. At least in that instance, we can try to attack the source. But the funny thing about FOMO is that we kind of create it ourselves. The world of social media throws us into a constant state of awareness: “what am I doing? What is everyone else doing? What they’re doing looks much better than what I’m doing.” As if those questions themselves aren’t harmful enough to our egos and our stamina, we often try to push ourselves to do everything to compensate. The end result? Exhaustion, friends we don’t like that much, and maybe an Instagram picture that only looks good because of the filter. Maybe that’s all some people need, but there’s no filter to make people nicer or to make an event more fun.

For transparency’s sake, I would like to tell you, readers, that I am writing this article with the intent of making this issue better for myself, as well as (hopefully) doing the same for you. I’ve been sucked in, especially being in college in which party-hopping or barhopping is 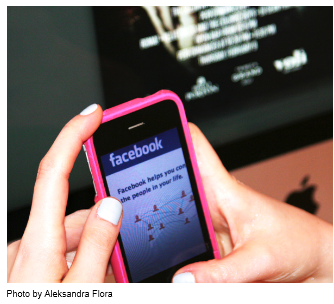 relatively easy. It’s not effortless enough that it isn’t a tiring experience to hit everything you want to do in one night, but it’s painless enough that you can convince yourself to try (oy). As I approach graduation, though, I’ve tried to “adult myself” a bit and set some boundaries. There need to be general rules and limits that can help you manage your time even when you feel like you could easily do all of these things you think you’re missing.

I trust psychology the most on this topic since FOMO is such an anxiety-based sensation. Psychology Today suggests focusing on the experience of the event you’re considering attending, rather than the “symbol” of it. Consider why you’re spending time, effort, and possibly money to attend. You want these “expenses” to be going towards experiences that will enhance your happiness, perhaps your wanderlust, and will give you a sense of fulfillment. Doing something to impress others or to exhibit a level of status will never be as satisfying as some might believe. Make a mental list of what you want to get out of experiences: does this one make the cut?

Rule #2: Remember that Everyone is Trying Too Hard

Why would people be posting pictures and “I am having such a good time at (X) event that you aren’t at” tweets if they didn’t want other people to see? That’s a long-winded way of saying that a lot of social media is the desire to impress others. Inherently, those posts will not be one hundred percent truthful. It isn’t that you are the only one missing out on some wild adventure; it is simply that some of those adventures aren’t so wild after all. Honestly, I’ve taken snaps at gas stations that I’ve altered to make look fun and #spontaneous. In the end, it’s still a gas station in Poughkeepsie.

Rule #3: “Practice an Attitude of Gratitude.”

More psych is coming at you! Once again Psychology Today hits the nail on the head and says that you should practice mindfulness, and being more appreciative of the things you have. You can minimize the idea that you’re missing out on something by truly considering the positive things that you do have. Article authors Linda and Charlie Bloom say it best: “FOMO is fear of not having something that is necessary for our well-being. Gratitude allows us to count the blessings in our life right now, at this moment, where life is actually going on.” Even if you’re home eating pizza, take a minute to remember HOW AMAZING PIZZA TASTES AND HOW LUCKY YOU ARE TO HAVE IT IN YOUR HAND.

Rule #4: Create Your Own Fun

No need to wait for other people to create experiences that may or may not be truly fun. Pick an activity you actually want to try (or a tried-and-true classic) and invite friends that you want to spend time with. Try a stay-cation and explore an area nearby that you’ve never gotten around to exploring! That way, you’ll know what you’re sure to have an enjoyable time, and you’ll be doing it on your own terms. Spearhead plans rather than hoping an escapade will show up on your newsfeed.

Also, don’t be afraid to do things on your own. Just because you’re doing cool things by yourself doesn’t mean those experiences are less valuable. In fact, they might be more valuable to you if you can wholly appreciate them without distractions. Take this time to learn about yourself, and really figure out what you like doing. Think: if you had the choice, what would you be doing right now? Of course, if you’re going on a hiking trip, tell some people where you’re going because “127 Hours” made me more neurotically safety-conscious than I was prior.

When all else fails, take a break from the social media hole that you’re digging yourself. If you can’t part with your phone altogether, try deleting a few apps. You might be less likely to use Facebook if you have to go all the way to your browser to use it. I think at this point in time; it’s unreasonable to ask millennials to get rid of all the technology that we have; it’s part of our collective lifestyle. However, keeping in mind that too much social media “socializing” can exacerbate FOMO can be a useful thing. If you begin to scroll through when you’re not looking for something specific, try to stop yourself. Do another activity, or try to appreciate the one that you’re already doing! You may not realize how much you’re missing until you put down the phone—even if it’s just for a couple of hours.

FOMO is real, but it isn’t a life sentence. You’re only missing out if you consistently don’t take opportunities that you genuinely want to take. All the other stuff? Not really that important. Gut feelings can come in handy at times like these, so stop sweating the small stuff, and focus on the big picture. Remember, you only live once, so spend your free time doing things you really want to be doing. 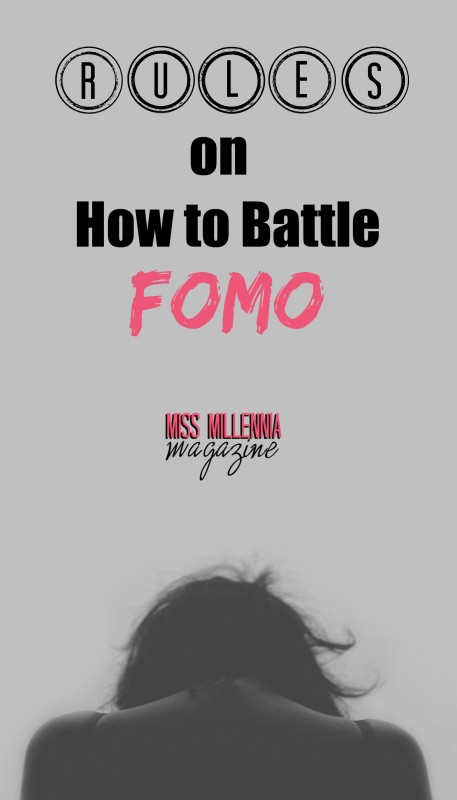