I graduated college nearly a year ago last May. I was excited to finally be done with school. I didn't think I would miss college, but I did. I wasn’t so sure why I was feeling this way, but it began to really kick in the following fall.

I had post-college blues.

College blues is an emotional period when you’re feeling down or stressed about college. I had this feeling a lot during my school years, because there was a point where I wasn’t sure where my life was headed. I also knew I was a part of a generation where a degree didn’t mean you were guaranteed a job, and unemployment rates after degree completion seemed grim. For me in particular, I was also dealing with even more discouragement. Every semester I was bombarded with some crap statistic or ranking stating that my major (journalism) was in the top worst degrees of 2011 or low-paying majors of 2012. Amidst it all, I breezed through my last semester more motivated than ever until I was done.

In spite of that, for some reason I started to experience this feeling of incompleteness. I slowly began to understand why. My previous schedule had mostly revolved around school for more than a decade and a half. This was the first time in my life where school wouldn't be the main event of my week. How was I going to deal with this? I was starting to miss going to school, waking up to get there, my awesome professors, some of the coursework, and my friends. Surely my friends were easier to find and locate, but I no longer had an excuse to be at school anymore. I was really happy to graduate, so why was this bothering me so much?

Now one year after undergrad, I’m pondering a return to school for next year. But I’m currently coping with the feelings of missing my college years, and at times questioning what I did and didn't do. I don't feel as emotional as I used to at the start, but when I do, I have think about reaching this important milestone and what this new beginnning means for me.

For starters, there are a several things you should do to avoid deal those feelings of college blues.

There's nothing wrong with missing school. It's natural to miss a routine you grew accustomed to for a few years. Unless you're going off to grad school or plan to pursue another degree, you're done with school. Accept that that you're headed towards a new path in life. You can't make the best of it if you dwell on the past. Get the facts on your desired career field, even if they don't look promising. The quicker you're honest with yourself and see the odds of how fast you can be happy with yourself after school, the faster you'll be able to act on.

It's a new chapter—open it, and take your time until you complete it. There are many ways to successfully segue into the real world, so don't rush. My post-college goals went mostly as planned because I set minor goals. I didn't expect everything to fall in place the way I wanted, however I was satisfied with the direction I was headed in. That's what mattered to me—being en route. And no, I'm still not doing the job I truly want, but I'm headed towards it, slowly but surely. This stage after college is the most important because now we learn to test our skills. Begin finding ways to make you most happy. Like a new job or internship. Research the types of jobs available to you, your expected salary, cost of living and employment rates for your city, and future expenses. These all have to be planned. If you're in a rush to move out home and find your own place without thinking about the responsibilities, you'll be setting yourself back.

Around this time last year my main goal was to get an internship, learn more, and add some meat to my boneless resume. That goal is complete, and then some. It has given me the motivation to apply to future jobs with confidence. Confidence I wouldn't have had if I chose to dive head first.

Don’t worry about what you missed. Thinking about what you could’ve done, will get in the way of what can do now. You can always catch up. You’re likely still in your early twenties but more mature, which places you at a better advantage of understanding things you might not have during school. I remember not having the time to add in an internship during college and feeling like I'd be at a disadvantage after graduation. Who was going to hire me with no related experience other than class work? But just two weeks after graduating, I scored two internships and another one later that summer. It may have taken me twenty-two applications to find one, but I'm past that now. Even though I could've done this all in college, I still got it done after the fact. When I look back now, I see how it was the best decision for me.

Keep yourself busy and active. What do you miss most about school? Miss the classes? Find a job, internship, or some volunteer work where you can learn more about your favorite subjects in college. As I said previously, I missed out on several oppurtunities I could’ve taken while in school, but rather than stay in depression mode about what I didn't do, I searched and searched for something to do. Sometimes I still feel like I'm doing my favorite coursework, simply because I found a job with very similar requirements. I'm never not busy now. If you're not doing what you want, find other avenues that you like or are similar to your desired career.

Networking with Mentors and Peers

Do you mostly miss the people in college environments? When I think about some of the people I was surrounded with, I quickly remember how happy I was to get out of there. But maybe this is what you miss. These are the people you saw and spoke with for four years, and perhaps some of them can provide you with helpful advice. Maybe you should seek contact with them. My alma mater still sends me emails inviting alumni to events, one of which I recently attended. It was a workshop on networking, and I happened to meet someone I plan on keeping contact with. If it's necessary for you to slowly transition away from school, get information from your colleges alumni office about things you can do.

Are you familiar with the quote, “It's not what you know, but who you know?” This quote has rung true for a lot of people. If you're feeling stuck and unhopeful about your life post-college, start networking with friends, peers, friends of peers, professors, and anyone you think would be helpful to you in a job search. I feel like the key to getting over the anxiety is occupying yourself, testing and adding new skills, and knowing a few people.

The more time passes by, the more I realize that it's no use feeling depressed. College was just a portion of my life, not all of it. My main anxiety came from feeling like I was no longer learning anything, but I was wrong. In the last year I learned so much, including things I found beneficial to my resume that I didn't learn in school. The key to coping with my college blues was to get out there and continue learning, and that didn't mean sitting in a hall getting lectured for an hour—I'm getting used to that.

Did you experience college blues? How do/did you cope? 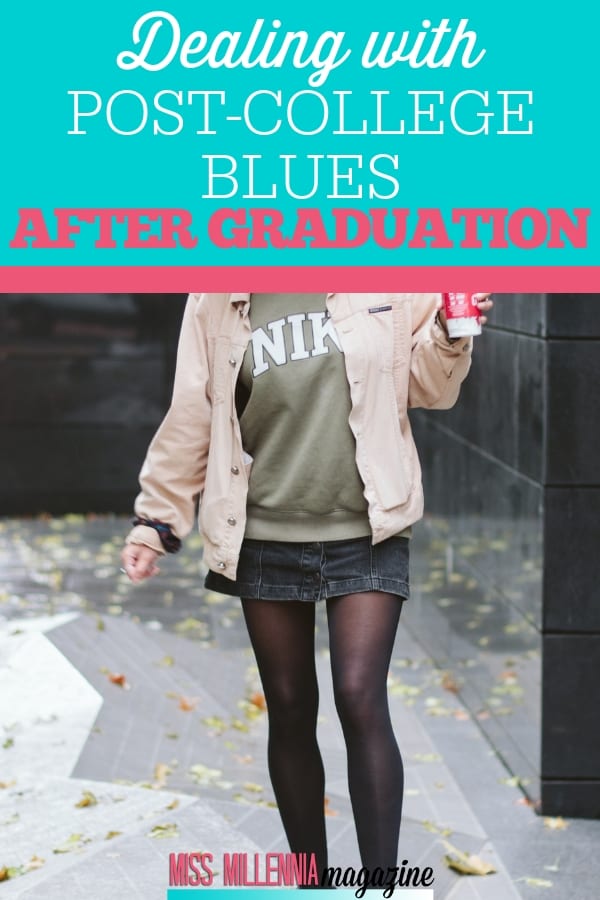