There are a few things about myself that I’m working on right now: minimizing feelings of jealousy, taking more initiative to do housework, and accepting criticism so that I can apply it in an effective manner. As a Meyers-Briggs proclaimed INFJ, I do not respond well to criticism. I tend to take it as a personal attack. My mom bears the same standardized-test-determined cross, and we both agree that it’s time to start taking things less personally.

Accepting criticism will not only make you more successful in the future, but it may end up bumping up your confidence as you increase your self-awareness. In fact, embracing criticism to make positive changes can ultimately make you more self-assured, and even smarter than you already are. Getting to the point at which you can accept and apply those critiques, however, can be a challenge. Here are a few helpful tips to help you face the not-so-harsh performance reviews.

It’s Not You…It’s Your Actions

Distinguish between an inherent flaw and the way you’ve handled a particular situation. Though you might find tough love to be an effective way of emotional problem solving, your friends may feel differently. If they tell you to back off a little with the aggression, it doesn’t mean you are an aggressive person with no heart. All this means is that you might need to approach these types of conversations in a different way. Don’t think of it as changing you, but altering some of the ways in which you participate in a situation.

Forbes suggests first putting a cork in your initial reaction, and then actively listening to understand the feedback you’re being given. Remember: someone is giving you comments in order to positively influence your future work or behavior, not to berate you (hopefully). Once you’ve heard what they have to say, be sure to respond with thoughtful suggestions on what you can do to heed the criticism. Don’t be afraid to ask what you can do to best move forward with this advice if you feel a little lost afterward.

Clarification is an equally good method of accepting criticism. If you feel that you need elaboration on a point, it’s okay to ask for the speaker to expand. You might find that their advice makes more sense in a different syntactical light.

Emotional responses make it difficult for us to think clearly, and thus, don’t always allow us to make rational decisions. In an ostensibly tense moment of emotional charge, it can be extremely helpful to take some time to absorb the information before responding. This way, you’ll be able to fully address the criticism with questions, comments, or concerns that you may have. In a professional situation, this may entail asking for a moment to gather your thoughts. With friends, you might want to sleep on it and talk on the phone the next day, or later on the same day. This is the best way to appear responsible, and to salvage any friendships that may have otherwise been frayed by a first instinct lash.

Know the Difference Between a Hater and a Critic

Being an adult means working with criticism, but it also means not accepting bullsh*t. Always remember with whom you are speaking, and their credibility with respect to the situation. Does the person want your job and wants to bring you down so you won’t perform well? It’s possible. The telltale sign of a hater will be a lack of key phrases like “You could improve (x)”, and an addition of more destructive language. Here is a chart to keep it all in perspective:

If you do feel as though criticism is becoming an attack, or that it is truly being distributed unfairly or harshly, it is okay to make that known. The line between constructive criticism and verbal onslaught can be a fine one if the person giving it is not quite apt at those difficult conversations. However, asking someone to phrase a question or comment in another way is a good method of assuring that the person meant what he/she said, or understanding the true meaning behind it.

As I said, it isn’t easy accepting criticism, but it’s certainly a necessity. The more poise and insight you can do that with, the better. This tool will definitely put you far ahead of most people your age. Good luck!

How have you used criticism to better yourself? Share with us! 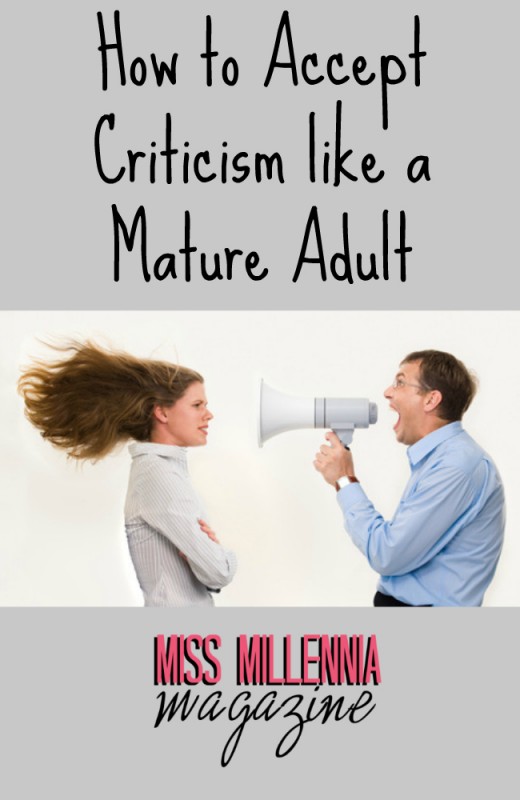 Previous Post: « A Fun Way To Keep Close With Old Friends
Next Post: The Best Kept Secret For Fall: Dickinson’s »