Marie Mills graduated from California State University at Northridge with a degree in Mathematics. She worked as an accountant for 11 years before leaving to raise her first child. Four years ago, with one child in college and two in high school, she became an assistant first grade teacher at a Catholic school in Louisville, Kentucky. Marie Mills is being featured because she has raised three children while being an example of a caring, funny, wise, and confident woman. 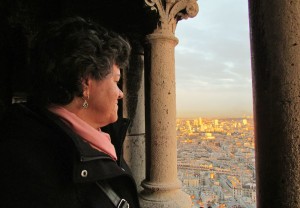 Miss Millennia Magazine: Since it’s that time of year, do you have any resolutions for 2015?

M3: If you had the opportunity, what would you say to your younger self?

Who are some of your role models?

Mary Tyler Moore, on The Mary Tyler Moore Show. She was independent and self-supporting, and that’s what I wanted as a kid. I’d say my current role models are a couple of very close friends that I’ve known for a long time, and they’ve been my friends for a long time because they’re wonderful examples of Christianity and faith. My kids, too, because they have so much less fear than I did at their age, they’re not afraid to try new things or take risks, and they’re examples of how hard work pays off; they’re such hard-workers.

How do you think being a mother has changed you?

That’s a book. But, short version, it’s made me much more empathetic. And patient. It’s made me concern myself with a much wider world than previously, because you want the best for your children in every possible regard, and so you think about more than yourself and your own world. It also made me much more uninhibited, because once a completely stranger tells you to put your feet together and let your legs fall apart. . .

Have you learned anything from the first graders?

I’ve learned that my children were exceptional. And that some people do need to be told three or four times to do something. And I’ve learned how important it is to lose a tooth. And that they genuinely want to help, these kids love helping, to do their jobs and help with the class.

I know you’re a busy person, so what’s your biggest time-management tip?

I always get as much ready as I can the night before, for the next day (lunches, pick out my outfit, etc).

Thank you, Marie Mills, for your time and your honest answers.

Readers, January is our Women’s Appreciation Month, so if you know any inspiring women you think should be featured, send us an email! You can email me at [email protected]

Previous Post: « How to Get Over a Nasty Breakup: 6 Foolproof Ways
Next Post: A Review of Marvel’s ‘Agent Carter’ TV Show »