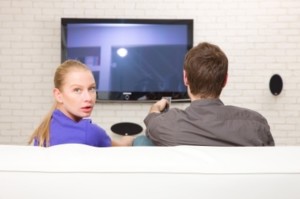 It’s no secret that women are the face of most cleaning products and cooking amenities. We are the supposed target audience, the ones most likely to pick up these items in the grocery store. While it may just be purely a marketing strategy that women are most likely to buy these products, it is important to pay attention to the tactics being used to capture the female audience. These advertisements have thirty seconds to grab our attention: how are they doing it?

Many advertisers use the same trick: slip marriage into the conversation. I find this very unsettling. Before you get mad at me or call me a raging feminist, let me first say that I don’t think there’s anything wrong with getting married, or wanting to get married, or being excited about your dream wedding plans. I have spent many afternoons swooning over TLC’s  “Say Yes to the Dress.” But is this all we’re thinking about, 24/7? I don’t think so. We have jobs, hobbies, friends and families. Sure, marriage is on our minds. But every move and purchase we make is not directed at the final goal of marriage.

I’m not as concerned with the advertisements that show only women using a cleaning product, such as a majority of paper towel commercials. The commercials that link a product that is irrelevant to marriage to some sort of wedding jargon are the ones that get under my skin. Take this Crest toothpaste commercial. The woman is gorgeous, but Crest is telling us that she needs a whiter smile if she wants a chance with the guy she sees. She’s never spoken to him, but she can already see their wedding flash before her eyes. Is that really what she jumped to, or did she maybe just want to say hello and get to know him first?

Now take another commercial I heard on my local radio station in Long Island. The commercial starts with a woman gushing about how her boyfriend just saved a ton of money buying their new car at this particular Long Island dealership. Ten seconds later, she reveals that the reason she’s excited is because now he can afford the expensive engagement ring she wanted. No mention of how great the car is, just the ring.

Is it impossible to think that this woman could simply be happy to be making an economically sound decision? How did we go from buying a new car to the status of her relationship with her boyfriend? In my opinion, the two are unrelated. The way to catch a woman’s attention shouldn’t only be by mentioning the words “ring” or “soul mate.” We’re interested in fresh breath and affordable cars as well.

Aside from all of the wedding drama in advertisement, there is one commercial I saw recently that gave me a glimmer of hope. It’s this Allstate insurance commercial, which is a huge slap in the face to anyone who ever said that women can’t drive. Fighting a false stereotype and keeping weddings out of an advertisement for something completely unrelated? High five, Allstate!

Perhaps Crest and my local car dealership will hop on Allstate’s bandwagon and start portraying women in a more realistic manner. In the meantime ladies, just be aware of what you’re taking in when you watch TV. No need to boycott these products (we all need to buy toothpaste) or stop making your “Dream Wedding” board on Pintrest. Just keep in mind how these advertisers are trying to get your attention, and remember that you are more than your wedding dress!

Previous Post: « What Did We Do Before Technology?
Next Post: HBO’s Girls: Already Mixing it Up This Season »