“One in three women will be beaten or raped in her lifetime.”

This staggering statistic was the opening line of the Spotlight monologue in the 2013 script of The Vagina Monologues. I had the honor to perform in the show this past weekend at Wesleyan University. Many other universities and communities engaged in vagina love this past week in honor of V-Day. The V-Day movement began fifteen years ago and was started by Eve Ensler, the author of The Vagina Monologues, with a mission to end the violence against women.

I was thrilled to perform a monologue called “The Vagina Workshop.” In the monologue, a woman attends a vagina workshop in order to learn more about her body, which she had avoided doing throughout her life. The character, as I interpreted her, is very intelligent, but has chosen naivety towards her sexuality and her body. The lack of communication about the vagina and female sexuality in today’s society had instilled a fear in her that if she did attempt to explore then something would be wrong with her, either for having that curiosity or in her findings by acting upon it.

These messages about body image and female sexuality are extremely important, but they are only starting points in the conversation of female empowerment. It is necessary to take pride in our bodies and respect our own sentiments regarding sexuality and body image in order to share these beliefs with others.

It is after this starting point that The Vagina Monologues addresses the travesties against women, how commonplace body shaming, violence and rape have become and the overall catastrophic disrespect for the female body. The monologues display how these issues take place in our own backyard and around the world. Although it is hard to put oneself in the place of some of the women described, such as refugees from Congo and Bosnia, the monologues from their point of view bring you amazingly close to their stories, and consequently their call for help.

One touch that my production of The Vagina Monologues added to the show was participation on behalf of the audience towards the V-Day movement. Before the show started, the cast asked audience members to fill our sheets of paper that began with “I am rising…” and to write why they were rising up against women’s violence. The responses were added to the background of our set and could be seen throughout the monologues.

To me, this small addition brought The Vagina Monologues and V-Day movement full circle. It is as important to listen as it is to take action. Although Eve Ensler has created an annual day in which we pay particular attention to these movements, V-Day needs to continue past the month of February. We should carry the reasons we are rising with us everyday, and make every effort to spread the message that the violence, the negative attitudes, and the ignorance need to stop.

It has been an honor for me to play a small part in this movement. As we learn to love our bodies and ourselves (including our vaginas) and put our shame in the past, it becomes even more evident how truly disgusting the statistics are that show such a lack of respect for the female body on a global scale.

Check out http://www.vday.org/home to learn more about the movement and see how millions of women rose and celebrated this year. And remember, no need to wait until next year to make your voice heard. The violence ends now, and that means today. 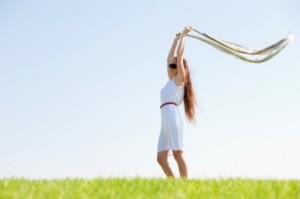 Previous Post: « A Call To Reform Higher Education
Next Post: How to Be the Perfect Party Hostess »