“If you have to choose between homework and sleep, get some rest and send me an email letting me know.” When my English professor uttered those words to me senior year, I almost cried. No one with any real power had ever told me it was alright to choose sleep. My college career was a juggle of various jobs, internships, and courses. Homework usually happened after midnight or between classes, and I was fairly certain I had more coffee in my body than blood. If you are a college student or recent graduate, you have most likely experienced the nights when you decide sleep can wait, and plough through essays and assignments until your brain has turned completely to mush. More and more, our culture shifts sleep into a choice rather than a necessity, not only for college students but a significant chunk of the population. According to the CDC, people under the age of 35 have some of the highest incidents of accidental daytime napping and falling asleep while driving, stemming mostly from their lack of nightly sleep.

The condition known as “sleep bulimia” stems from a variety of sources–technology and efficiency being the driving factors. Technology, especially for young adults, has become a powerhouse of mass media. There are millions of things you can do to entertain yourself–TV, computers, and phones, to name a few. The creation of Netflix also saw the creation of “binge-watching” TV shows. You can watch whole seasons in a day. The instant gratification of this content, much like Facebook and Twitter, spurs an increased activity in dopamine levels. For example, every time you receive a notification on a selfie, you get a little extra dose of biological happiness.

Because of this huge increase in mass media, our culture has also experienced a huge increase in the practice of and need for efficiency. We want everything done and we want it done now. This applies to most areas of life but especially work. Work-life balance is an issue in all companies and is frequently discussed for improvement, yet sleep never seems to get mentioned. College students and recent grads especially have issues in this department. The job market is becoming more and more competitive, and students need to have more on their resume in order to be considered. Do volunteer work; take an unpaid internship–anything to get ahead of your peers before graduation. So, you take that full-time internship in hopes of landing a real job, but now you have work and classes, and extracurriculars, and homework, and somewhere in there you want to see your friends or significant other. At the end of the day, sleep is usually what people give up (“I’ll sleep when I’m dead,” you tell yourself.) Around you, family and friends praise you for doing it all.

The biggest issue is that sleep is not a choice; it's a necessity. The human body needs it to function. Twenty-four hours without sleep has roughly the same effect on decision-making as six glasses of wine. You would not be allowed to drive at this alcohol level, yet we expect people to function in society on that much sleep. Research from the University of Warwick ‘s medical school studied sleep deprivation in both genders and found that women suffer much more health risks when skimping on sleep. Women who sleep five hours a night or less are twice as likely to suffer from high blood pressure and cardiovascular issues than women who sleep the recommend seven to eight hours. These results were not seen in men, however, making this specifically a women's health issue. Lack of sleep has also been linked to obesity and diabetes.

So next time you consider skipping on sleep, think about why you are really doing it. Is it something you can change, such as cutting back on Netflix, or is it more complicated, like cutting work hours? Either way, remember that your sleep affects your mental and physical health. You must find a way to fit in more sleep. 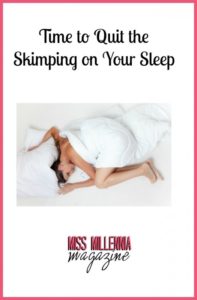 Previous Post: « Staycation: Exciting Adventures Near You
Next Post: 4 Easy Ways to Make Friends in a New City »