As a Princeton graduate, Richie Furst (Justin Timberlake) struggles to pay for his tuition. Therefore, he finds a solution to his problem through gambling and Richie hustles his fellow students for an online poker company.

Now, believing he was cheated, Richie goes to Costa Rica to confront the online poker company’s CEO Ivan Block (Ben Affleck). In the midst of gambler’s convention, Richie finds his way to Ivan and presents his case. Intrigued by Richie, Ivan Block offers him a job as his right-hand man. Richie’s math smarts seem to be the reason for the sudden job break; however, his bluntness and naivety are the real reasons for Richie’s luck.

As a movie, Runner Runner creates a perfect fantasy of a beautiful life; freedom, flashy cars, gorgeous women, big parties, and…money. This movie sends a message that by having money you can rule the world. In addition, the movie promotes Costa Rica as a very picturesque place to visit. It would't be a surprise if Costa Rica becomes one of the hot travel spots this year.

Despite the fantasy the movie shows its viewers, Runner Runner seems to lack the needed twists in its plot. Unlike the movie title, there isn’t a lot of running done in the movie, which one would definitely expect. It was good to see Oscar-winning Ben Affleck step out of his usual niche and play semi-negative character— although he lacks the wickedness required to be a villain. Also, Gemma Arterton’s character doesn’t necessarily contribute to the plot development aside from the exception of her beautiful looks.

Moreover, watching the movie makes one feel that they should have a personal accountant present to consult with over the math of gambling. Another problem is that, to some people, the movie might be viewed as a promotion for gambling because it pictures this life to be so perfect. The ending of the movie also needs a bigger twist to leave its viewers astounded, which was not the case.

Runner Runner is the perfect watch for a movie date at home with a bowl of popcorn. Therefore, I would definitely wait until the movie comes out on outlets, like Red Box, to rent it. 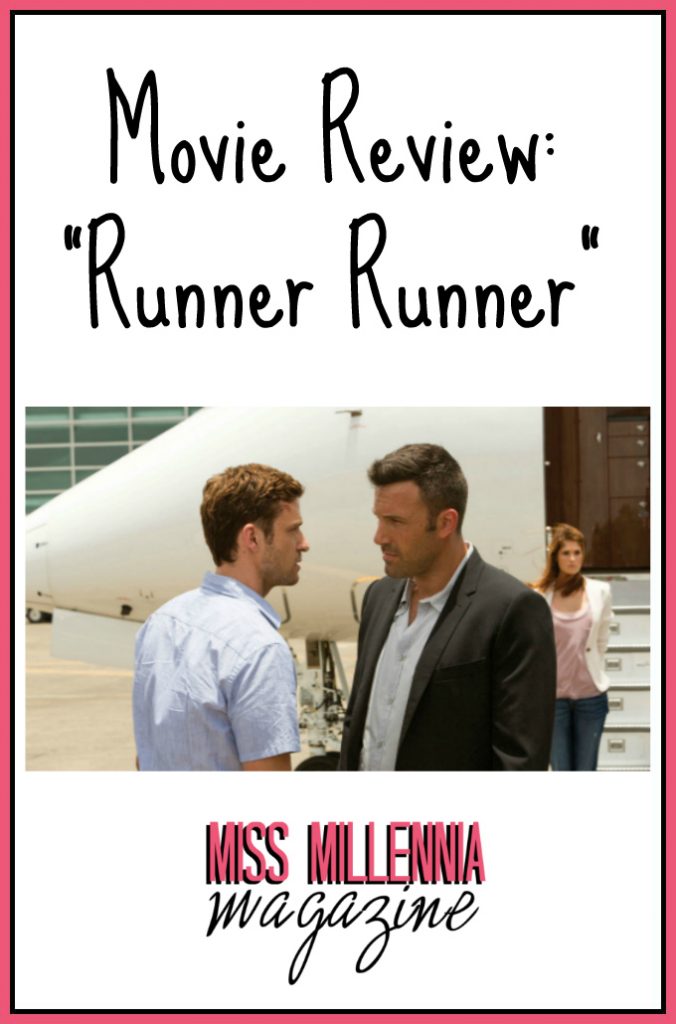 Previous Post: « An Excerpt From Mary Elizabeth Pope’s Divining Venus
Next Post: Mobile Phone Insurance: Is Your Phone Worth Protecting? »