On June 25, 2014, I was proud to call myself a Hoosier. A federal judge ruled that the proposed HJR-3 amendment, which would allow the Indiana state legislature to alter the state’s constitution to define and recognize marriage as existing between only one man and one woman, to be unconstitutional. This was a monumental day in Hoosier history for freedom and equality. U.S. District Court Judge Richard L. Young declared that HJR-3 violated the 14th amendment of the U.S. Constitution because it denied individuals equal protection. Young wrote, “It is clear that the fundamental right to marry shall not be deprived to some individuals based solely on the person they choose to love. In time, Americans will look at the marriage of couples such as Plaintiffs, and refer to it simply as a marriage — not a same-sex marriage. These couples, when gender and sexual orientation are taken away, are in all respects like the family down the street. The Constitution demands that we treat them as such.”

After the release of Young’s ruling, the Marion County Clerk’s Office (inclusive of Indianapolis, the state’s capitol) began issuing marriage licenses to same-sex couples and many couples lined up at their local court houses so that they could tie the knot. Following suit, many other Indiana counties surrounding the biggest cities also began issuing marriage licenses and marrying same-sex couples, while many of the smaller counties in the state are holding off on issuing licenses while they wait to see how the proceedings develop.

However, shortly after the Young’s ruling the Indiana Attorney General’s office made a statement declaring their intention to appeal the ruling:

“Today’s ruling still is being studied and the Attorney General’s Office soon will advise county clerks who issue marriage licenses as well as the other state defendants – the State Department of Health, the Department of Revenue and the Indiana Public Retirement System — on what changes in procedure Chief Judge Young’s decision imposes upon them during the appeal. The State will ask for a stay of today’s ruling pending appeal.”

The Attorney General’s Office has officially filed an appeal to the ruling and is seeking a stay of the trial court.

A few days after the initial ruling that allowed same-sex couples to marry in the state of Indiana, the Attorney General's office was granted a stay in the process, halting all marriages and causing the state to no longer recognize the marriages that they had performed only days earlier.

For more info, check out my sources: 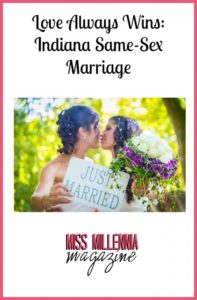 Previous Post: « History and Culture Novelized: Snow Flower and the Secret Fan
Next Post: 6 Ways to Achieve a Green Pregnancy »