The Internet Can't Decide If Mark Ruffalo Is A Feminist, Here's Why

Avengers actor Mark Ruffalo has recently taken to Tumblr in support of feminism. This isn't entirely unusual for Ruffalo, who frequently takes to social media in support of an array of topics. Readers may remember an open letter he wrote back in 2013 about the experiences his mother faced when she had an illegal abortion, and how those experiences left him  “aghast by the lowliness of a society that would make a woman do that. I could not understand its lack of humanity; today is no different.” They were powerful words from Ruffalo back then and he continues that same energy today.

Ruffalo re-posted a Facebook post from Libby Anne Bruce about women who claim that they aren’t feminists, taking up an issue with the “I'm not a feminist” movement that seems to have swept up mostly younger millennial women, who have been posting anonymously on the Women Against Feminism Tumblr about why they do not need the cause. Many of these included handwritten signs about it.

Ruffalo is not amused by the trend and used Bruce's words on Tumblr to say it. She gives all the anti-feminist a little back history into the real life affects of feminism.

It reads: “You're insulting every woman who was forcibly restrained in a jail cell with a feeding tube down her throat for your right to vote, less than 100 years ago.”

She goes on to also argue that “you're undermining every woman who fought to make marital rape a crime (it was legal until 1993).”

Finally, she sums it up with:”In short, kiss my ass you ignorant little jerks.”

Unlike some celebrities, who try to entice people into the feminist movement by highlighting the benefits to it (See Emma Watson's HeForShe campaign), Ruffalo is using Bruce's words to show us how he really feels, and it comes off very harsh, and little condescending.

There are a lot of kinds of feminism, and the definitions of feminism tend to shift from group to group. Ruffalo quickly received some back lash for his posting from a number of angry people who argue that they support feminism, but not the traditional sense of it. 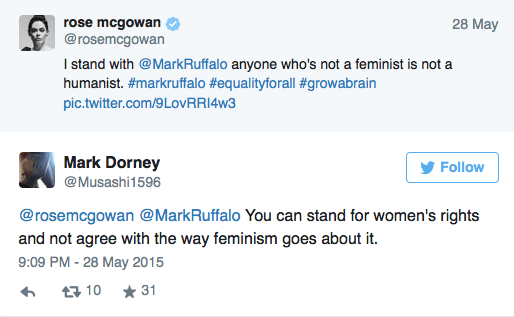 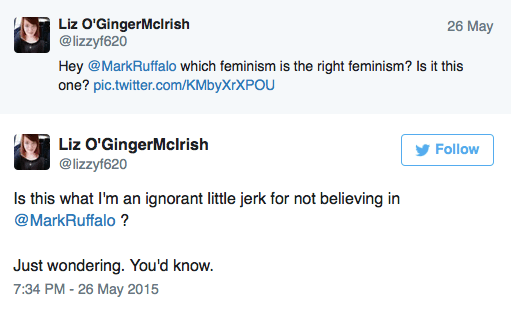 Once more, no one can ever please everyone. What are your thoughts on the matter? Do you think Ruffalo's post was a good thing for feminists?

Previous Post: « 6 Udemy Courses that Will Teach you How to Make Money Online
Next Post: 7 Inexpensive Hair Products for Perfect Curly Natural Hair »