Why is it that in the darkest of times, we look for the brightest of things?

I’m asking because I’m not sure myself – yet that is exactly what I did on the beach, alone with my mother in April 2005…

These are five amazing actors that are telling my story next week at Manhattan Repertory Theatre’s Short Play Contest.  The scene they are reenacting…was one of the hardest moments in my life.

The day I told my mother I was sexually abused.

It was April 2005.  My voice teacher, who was my trusted mentor and also godfather for two years, had been molesting me for months, and I had “froze in numbness” to block out that devastating loss in my life.

After months of keeping this secret inside, I could no longer take it.  I told my mother that I needed to take walks with her every day to “heal” – although I could not say what from.

Then one day…well, the moment was so powerful, that I wrote a scene about it, and later incorporated it into Imprints, my full-length drama based on my story, as well as one of my brother’s journals for the first 72 days I was in a coma.

Imprints is a play that covers the overwhelm I felt piecing together fragments of trauma once I awoke in the surgical ICU.  The play goes in and out of past and present – just like my thoughts did as I was trying to recall what had happened just before a coma changed my world forever…and two weeks after this very moment…

The moment I first told someone I was abused

I told my mother.  It’s best put in her words.

Which is why my mom generously wrote this to share with you all here:

“Amy and I were walking on the beach in Fairfield, CT.  She had taken a month off from school, and I promised that although I didn’t know what she needed to heal from, I would be at her side and help her through.  She was so different at this point than she ever was before, her personality was sullen, she was anxious, losing weight, not focused, in turmoil.

WE had JUST gotten back from Kripalu where we did a mother-daughter retreat, Journey dancing, and Amy has always been such a beautiful, soulful dancer- but in one of those dance exercises, she went into the middle of our circle surrounded by me and many other women.  A woman touched me on the arm, and looking into my eyes, said, “look, your daughter is dancing a dance of such deep pain, you have to find out what the source of her anguish is about.”  I will never forget this woman’s voice and how it jolted me into reality.

We were walking on the beach in Fairfield, and suddenly I looked into her eyes and asked for some unknown reason from the deepest part of my soul, “Has B, her mentor, voice teacher, acting teacher and now, “godfather,” ever touched you?”

She began speaking; it was as if a plug was pulled out of a dam’s wall, and she said, Yes, and began to describe what he did – and I went into complete shock and craziness. I started to scream, No NO, how could he, I trusted him with my precious child, he was a son of a bitch, etc., etc., etc.  I couldn’t stop raging, until my intuitive daughter screamed – “Stop, now tell me one thing good, because I can’t witness all this negativity right now,” and she insisted I find something positive to say.

My head went numb, and I started to look all around me and paused and finally looked up to the sky.  It was a really beautiful sunny day, and I noticed that the sky was a shade of deep blue.

Thanks, Mom. I remember feeling a closeness and safety I hadn’t felt with her before. Things were going to get better now. We were going to heal, think optimistic thoughts, get therapy, and purge this man from our systems.

Two weeks later, we had a Passover Seder. 48 hours after that, I was in a coma.

Months later, I awoke, and according to my brother’s journal entries, the first words I could stammer out was…

I wrote a scene based on this powerful moment between my mother and I., And we are sure to be an emotional mess when we watch it performed on August 17th and 20th as part of Manhattan Repertory Theatre’s Short Play Contest.

This scene, appropriately called, The Sky is Blue if one of my favorite moments of Imprints. And a favorite memory of mine.  It reminds me that in the darkest of times, the sky is always blue. We always have positivity and gratitude to cling onto when life feels terrible.

And even if the sky isn’t blue…it will be eventually.

There’s always a tomorrow. Or the next day – the sky will be blue.

See The Sky Is Blue This Week!

Come see this scene in New York at Manhattan Rep Theatre’s Short Play Contest August 17th and 20th.  The scene is two parts: me telling my mother I was abused, and then months later, when my mom had the burden of telling the family I was abused while I lay in a coma.

The biggest lesson I learned in writing this scene, and in writing the unscripted path my life has taken, is that in the moments of hopelessness, look up.  Something will be there.

So take a second and look up.

What do you see?

All artwork was created by Amy on her detour. Read about “Imprints,” and help support PTSD awareness through theater by making a pledge at patreon.com/amyo, and see The Sky is Blue at Manhattan Repertory Theatre on August 17th and 20th in NYC here. 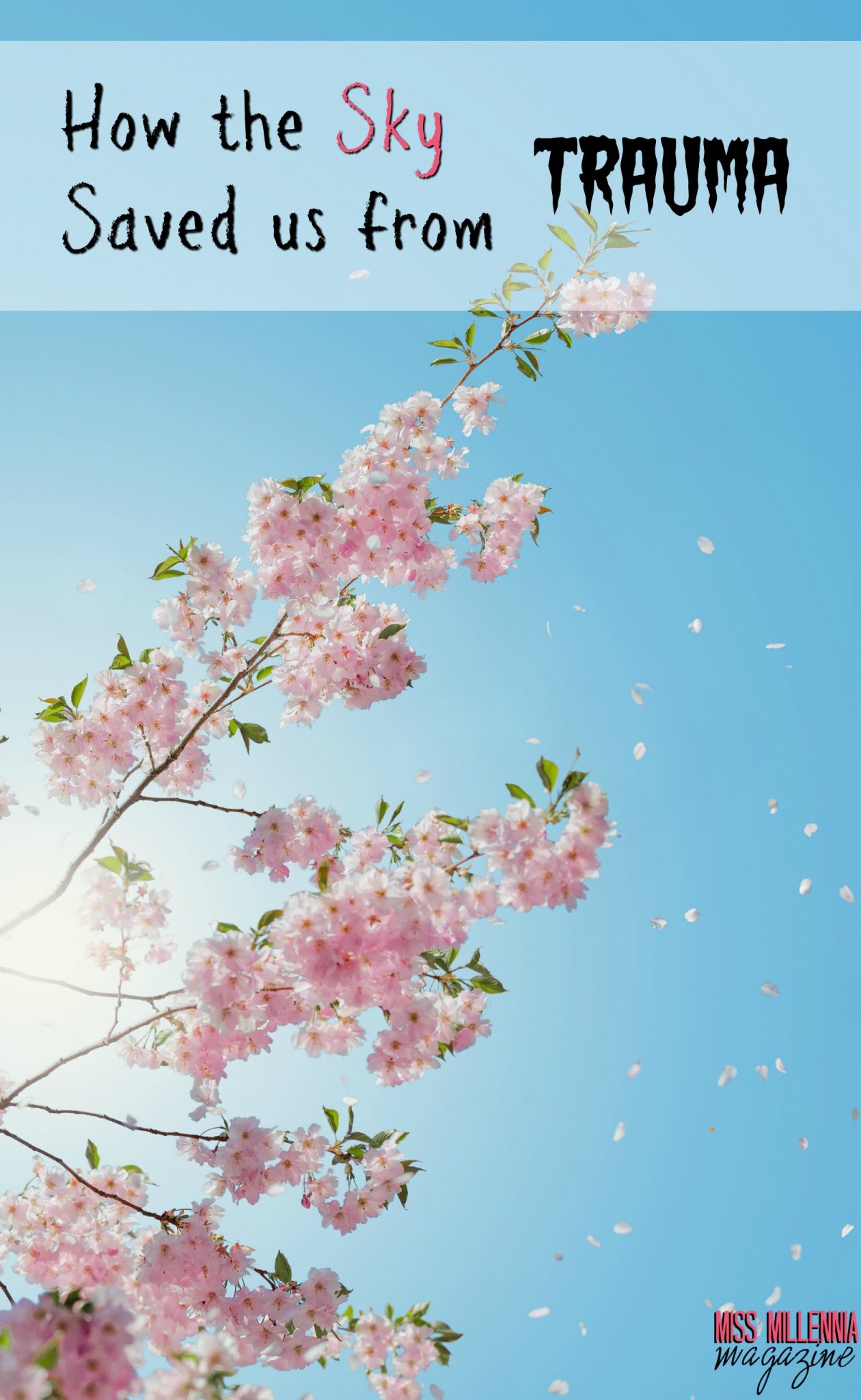 Previous Post: « Everything You Need for Your Back to School Shevival Kit
Next Post: Easy Ways to Conquer College Stress »