I don’t know about you, but for me, winter break means binge-watching on Netflix and catching up on all the shows I got behind on during finals. So come the new year, I have nothing to watch! To help out with the lull, I’ve compiled a list of four new shows premiering in 2015 that you should definitely watch. 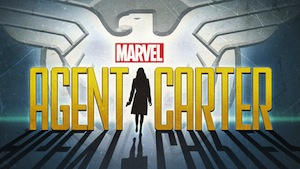 Even if you’re not a big superhero fan, ABC’s new show Agent Carter, could be for you. It stars Hayley Atwell as Peggy Carter, a former military officer and founder of SHIELD, Marvel’s law-enforcement and spy agency. While Peggy was first seen in Captain America: The First Avenger, this show will be much more of a spy-drama than a superhero show. Peggy is an ordinary woman whose only superpower is pulling-off red lipstick while kicking bad-guy butt. Agent Carter adds to the hopefully growing trend of female heroes on TV and in film. This show is set in the ‘40s, so if nothing else, you should watch it for the gorgeous period costumes.

If you’ve been looking for more diversity on television like I have, Fresh Off the Boat is right up your alley. This show will be the first Asian-American sitcom seen on US television since the 1994 show All American Girl, which lasted for one season. ABC’s description of the sitcom reads, “It’s the ’90s and 12 year old, hip-hop loving Eddie just moved to suburban Orlando from DC’s Chinatown with his parents. It’s culture shock for his immigrant family in this comedy about pursuing the American Dream.”  The show stars Randall Park, a man you may have seen in various movies, but really should watch in the web series, Baby Mentalist. Just watch this video, you’ll thank me later. If the Baby Mentalist video wasn’t enough of a recommendation, you can watch the trailer for Fresh Off the Boat here.

iZombie is a show based on the comic series of the same name. Imdb’s description of it is:

“A medical student who becomes a zombie joins a Coroner’s Office in order to gain access to the brains she must reluctantly eat so that she can maintain her humanity but every brain she eats, she also inherits their memories and must now solve their deaths with help from the Medical examiner and a police detective.”

The show-runner, Rob Thomas, compares it to both Buffy the Vampire Slayer and Veronica Mars, so if you like either of those, this show is for you. The premise sounds odd, but the comic series ran for 28 issues and was nominated for an Eisner Award (a big deal in comics), so it definitely has solid source material. It’s also another TV show with a strong female lead, and a female scientist no less. iZombie looks like a fun new show, that I will definitely be looking forward to.

Speaking of the zombie apocalypse, another new show in 2015 is Fox’s Last Man on Earth, created by and starring Will Forte, an actor known for his SNL run, but who has also starred on shows such as 30 Rock, Gravity Falls, and The Cleveland Show. This show is a comedy about the last man left on earth after everyone else has mysteriously disappeared. The show starts with him looking for another human—anyone, but the only person listed under the cast so far is Will Forte, so who knows if he’ll be successful. The premise of “post-apocalyptic comedy” is enough to keep my interest. The trailer can be found here.

If you’re trying to figure out what your TV schedule for 2015 will be, make sure to keep these in mind. Now you have four more things to look forward to in the new year!

Previous Post: « How To Stay In Shape And Healthy On A Budget
Next Post: Millenial Mindset: We Need to Take Rape Allegations Seriously »